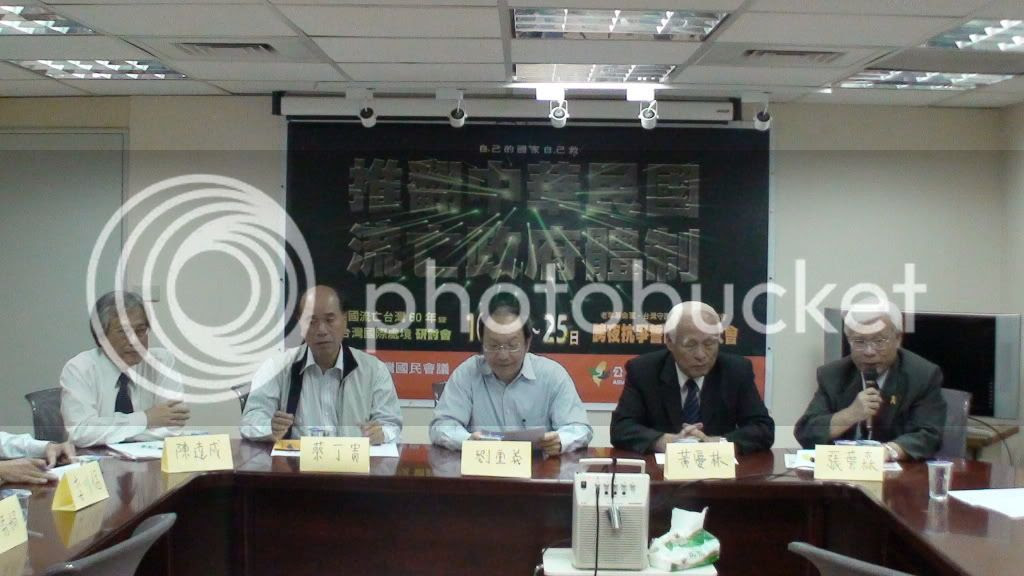 The MacArthur Center for Security Studies (MCSS) at the Institute of International Relations, National Chengchi University (NCCU), had its grand opening today, with six panelists — including The Associate Press’ Peter Enav, Wendell Minnick of Defense News and myself — discussing national security and the Taiwan Strait. About 125 people were in attendance, including officials from the Ministry of Foreign Affairs and the National Security Council, as well as foreign diplomats (AIT Director William Stanton made an appearance but did not stay for the round table). The MCSS is sponsored by the US-based MacArthur Foundation, with an annual budget of US$550,000 for three years. Its Web site can be accessed here.

Interestingly, about a dozen Chinese exchange students (undergraduates) were also present. In my short chat with them, they told me that the process of getting visas to come to Taiwan was very complex — especially on the Chinese side. They said that about 30 students were currently at NCCU for one term, until the Spring Festival.

I presented the following paper:

While it is too early to render judgment on whether the cross-strait policies of President Ma Ying-jeou will create long-lasting peace in the Taiwan Strait, there is growing evidence that rapprochement has not resulted in a military drawdown on the Chinese side. In fact, while Beijing has shown some diplomatic “goodwill” toward Taiwan, the Chinese military posture vis-à-vis Taiwan has remained belligerent and, in some ways, has hardened. Beijing has refused to redirect or dismantle the 1,500 ballistic missiles it targets at Taiwan, and the rapid modernization of its armed forces, though not solely directed at Taiwan, has been accomplished with a Taiwan contingency very much in mind.

Given this, we can assume that this military posture is being replicated on the espionage front. This is arguably the area where China has benefited the most since Ma assumed office in May 2008, for while the military balance in the Taiwan Strait has gradually been drifting in China’s favor, there has been no fundamental change, no paradigm shift, in Taiwan’s ability to defend itself militarily. In other words, attacking Taiwan today would be just as formidable a challenge as it was, say, five years ago.

On the intelligence front, however, a paradigm shift has occurred. We are seeing today an unprecedented influx of Chinese visitors in Taiwan. This creates opportunities for Chinese intelligence to conduct surveillance, gather information and cultivate sources, “conscious” or otherwise. The second shift has occurred in the investment sector. By opening Taiwan to Chinese institutional investment, the Ma administration is exposing various sectors of the economy to economic espionage, technology transfer and cyber attack. In other words, while investment could be beneficial economically, we must not forget that China is not an ordinary investor and that it may have ulterior motives.

The threat assessment can be summed up with the following: While China’s intent and capabilities have remained stable in military terms, on the espionage front its capabilities have been greatly enhanced by Taiwan’s rapid opening to Chinese tourism and investment.

In late May this year, a Chinese tourist named Ma Zhongfei was caught taking pictures in a restricted area at the Armed Forces Recruitment Center in Taipei. We will probably never know whether Ma was simply curious, had improvised himself as a spy, or was acting on orders from the Chinese government. What is certain is that his actions were clumsy, overt, and not the work of a professional intelligence officer. This case nevertheless highlights the greater potential for spying by the Chinese intelligence apparatus.

Beijing has retained a tight grip on the Chinese who are allowed to visit Taiwan. By controlling the spigot, China is in an ideal position to insert agents posing as tourists or businesspeople, or to ask ordinary citizens to do something for the state, either for patriotic reasons or through blackmail. Given Taiwan’s relative lack of intelligence about ordinary Chinese, screening potential spies before they enter Taiwan will be a formidable, if not insurmountable, task. It will be even more difficult to keep tabs on Chinese visitors in Taiwan once restrictions on their movement are relaxed, which the Ma administration has said it would do. Clumsy Ma Zhongfei was caught, but for every one that is caught, many intelligence-gathering operations may have succeeded and gone unnoticed. As I have argued elsewhere, it is also possible that Ma Zhongfei was part of campaign to overload Taiwan’s security intelligence apparatus with a series pinprick “attacks.” By creating “info glut,” Chinese agents could generate so much noise that it becomes virtually impossible for Taiwan’s finite intelligence resources to tell credible threats from false ones.

For the past 60 years, strict rules on Chinese visitors to Taiwan meant that its borders were relatively secure from human intelligence (HUMINT) operations on its soil by Chinese agents. As a result, little effort was made to protect critical infrastructure, airports, telecommunication nodes, government offices and military bases from espionage. The sudden influx of Chinese in Taiwan, however, caught everybody by surprise, with the consequence that most of that infrastructure is now relatively accessible to anyone with an intent to conduct espionage. In some cases, “spies” do not even have to be highly professional to collect actionable intelligence.

The Ma administration has also shown its willingness to allow more Chinese media to operate in Taiwan and to water down restrictions on the duration of postings. Given the state’s control of most Chinese media, and in Xinhua news agency’s case its close ties with the Chinese intelligence apparatus, Chinese reporters also represent a real espionage threat to Taiwan. While there is a long history of journalism acting as a cover for intelligence officers — not only by China but also the US and the UK, among many others — Xinhua distinguishes itself by being seen by most Western intelligence agencies as an espionage threat. In fact, my former employer, the Canadian Security Intelligence Service (CSIS), always assumed that whoever was sent to Canada by Xinhua was an intelligence officer. In light of the situation in the Taiwan Strait and the high stakes involved, we can assume that whoever Chinese media deploy to Taiwan will not only be more aggressive in their intelligence collection, but also far more professional. By virtue of the greater access that the profession gives them, such agents could develop high-level sources, gather information on dissidents and members of the media, and provide a variety of actionable data on government, the military and critical infrastructure.

After embracing market reform during the Deng Xiaoping era, China under President Hu Jintao and Premier Wen Jiabao appears to have backtracked on economic reform, with the state gaining more, rather than relinquishing, control over the private sector. While some critical companies (in the energy and communications sectors, for example) are fully owned by the state, the great majority of firms are semi-private or only private on paper, with funding coming from state-owned banks.

Many boards of directors and chief executive officers at such companies are retired Chinese Communist Party (CCP) officials. For example, China Mobile chairman Wang Jianzhou is a CCP official who has occupied various posts in government, while Zhang Qingwei, the chairman of the board at Commercial Aircraft Co of China, or COMAC, is chairman of the Commission of Science, Technology and Industry for National Defense of the People’s Republic of China.

With this in mind, the Ma administration’s decision to open various sectors of Taiwan to Chinese institutional investment is troublesome. While critical sectors, such as telecommunications, defense, semiconductors and LCD, remain off-limit or restricted for the time being, many others, such as real estate, banking, electronics and construction, are now — or will soon be — open to Chinese investment. One that door has been opened, little by little the Chinese could whittle away at Taiwan’s restrictions on investment, while Taiwanese firms may pressure Taipei to accelerate the pace of opening or lift restrictions altogether, until we reach a point where no sector is off-limit to Chinese investment.

As with tourists and journalists, the more contact there is between Chinese and Taiwanese, the greater will be the opportunities for Chinese individuals to collect intelligence, cultivate sources, conduct blackmail, set “honey traps” and so on. Furthermore, institutional contact will involve creating data links between Taiwanese and Chinese parties to facilitate the sharing of information. The consequences of Chinese investment in the banking and telecommunications sector could be dire for Taiwanese, as Chinese intelligence could far more easily gain access to personal and credit information at the source (e.g. theft, malware, etc), or by conducting intercepts on electronic conversations, transactions and so on. Aside from purely economic espionage, the principal targets of such activity could be government and military officials, as well as the Taiwan Independence movement, members of the opposition, and its supporters. Creating an in-depth profile of such individuals and drawing a link network (i.e., who knows who) would therefore be far easier than it has been in the past.

All this is contingent on the Taiwanese government’s assessment of the threat. Previous Taiwanese administrations also opened certain sectors of Taiwan to Chinese investment, or allowed Chinese to visit Taiwan. But as their threat perceptions was far more cautious than that of the Ma administration, they set quantitative and qualitative limits to ensure that national security would not be undermined. The Ma administration, however, seems to live under the premise that its still testy cross-strait initiative has resulted in an immediate change of posture in Beijing. In fact, in the wake of Typhoon Morakot, Ma was arguing that nature, rather than China, was the nation’s greatest enemy. There are indications as well that the National Security Bureau (NSB) under secretary-general Su Chi has adopted a more China-friendly attitude, which implies that its threat perception may have changed. A close reading of Chinese elite views on Taiwan,[vi] however, or an assessment of its Order of Battle (ORBAT), shows that cross-strait dialogue has not been accompanied by goodwill in terms of the behavior of the Chinese military and intelligence apparatus. The kind of assistance, if any, that the Taiwanese government provides to the industry to help it protect itself against Chinese espionage will be a good indication of whether Taipei takes the threat seriously or not.

Lastly, while there is no knowing what will happen in cross-strait dialogue, as the two sides start addressing more contentious aspects of the relationship — political issues, sovereignty and so on — frictions are bound to arise, not only in the dialogue itself, but from within Taiwanese society, which could threaten to derail Ma’s plans through electoral retribution in 2012. Should Beijing fear a return of the Democratic Progressive Party (DPP) in the Presidential Office in 2012, it could decide that force is the only option and could do so in concert with aggressive intelligence operations in Taiwan. Given the paradigm shift that has occurred since Ma came into office, Beijing would be in a far better position to target Taiwanese society, critical infrastructure, government buildings, and military bases — the direct result of the intelligence collected by Chinese agents while Taiwan slept.
張貼者： Nathan 於 凌晨1:45 0 意見
以電子郵件傳送這篇文章BlogThis！分享至 Twitter分享至 Facebook分享到 Pinterest
標籤： 好文, 馬英九, 賣台 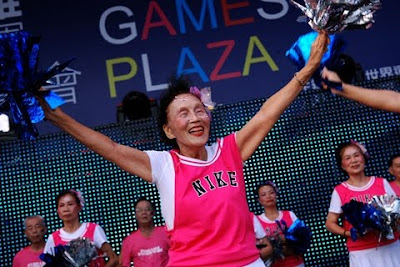 Who says the elderly could only wait for their deaths? A group of them, averagely aged 70, are determined to break the stereotype. They not only formed a team of cheerleaders but fought for the opportunity to perform at the opening ceremony of the World Game in Kaohsiung in July 2009. Their 9-month preparation left not only them but their families the most memorable memories of their lives. 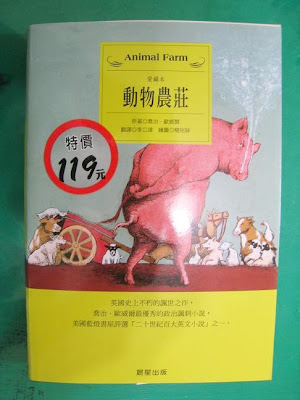 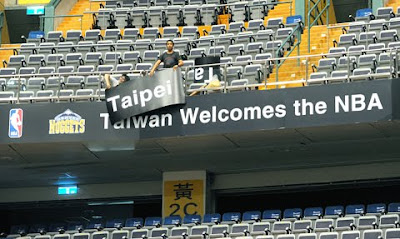 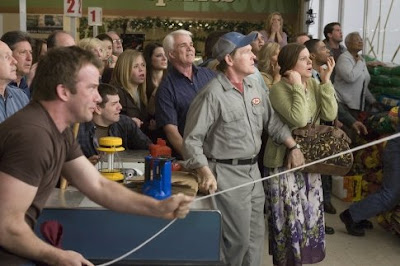 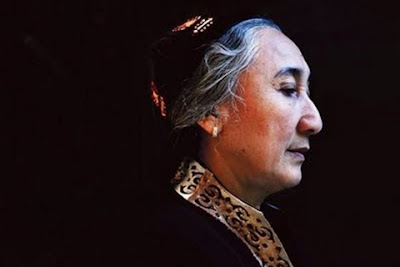 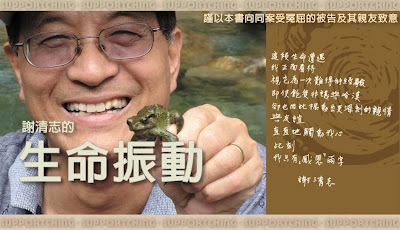